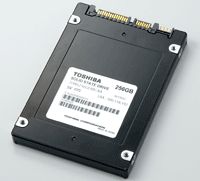 Toshiba is launching several new solid state drives, with capacities ranging from 8GB to 256GB. The 8, 16, and 32GB models are designed for netbooks, while the 256GB model is destined for pricier notebooks.

The 256GB model is a 2.5 inch disk that you can swap out for any standard 2.5 inch hard drive. But it’s also just 3mm high, making it one of the thinnest SSDs around. It supports read speeds of up to 120MB/sec and write speeds up to 70MB/sec. Unfortunately, it still probably won’t fit in your Eee PC anytime soon.

The lower capacity flash drives which are destined for netbooks and UMPCs have read speeds up to 80MB/sec and write speeds up to 50MB/sec. They should be available during the 4th quarter of 2008 for an unspecified price.