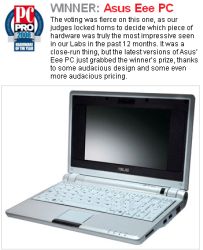 Hot on the heels of its Gadget of the Year award from Stuff, the Asus Eee PC has picked up PC Pro’s Hardware of the Year prize. Asus also won the PC Pro’s Technology Innovator award. As the judges put it, the tiny computer “took a flamethrower to the rulebook and helped define a whole new category of product.”

The funny thing is that the Eee PC 701 that started the trend was built primarily from off the shelf components. You take an old Intel Celeron processor, some cheap RAM and a little SSD, throw in a small display designed for digital picture frames and portable DVD players and all you need to do is build a tiny keyboard, case, and motherboard. The astonishing thing is that nobody had come up with this idea for building a cheap ultraportable sooner.

It’s possible that nobody saw the market a few years ago because there was always a push for powerful machines with more processing power than the last. But over the last few years the web browser became the killer app, because once you have a machine capable of connecting to the internet and surfing the web, you have a useful device. You don’t even need a word processor, video player, or much of anything else if you have a good web browser, because all of those applications are available online. Of course, the Eee PC and most other netbooks have word processors and video players. But they don’t need them.

What do you think? Was the Eee PC innovative? Or just another “why didn’t I think of that?” idea?