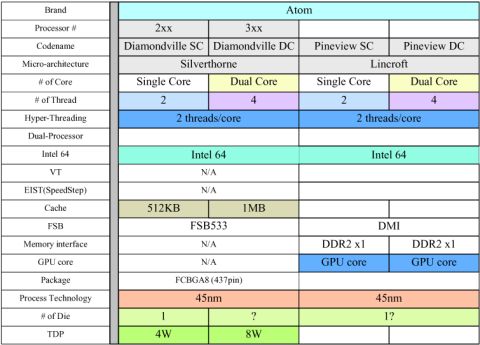 According to an Intel product roadmap posted by Japanese site PC Watch, the chip maker plans to release its next generation version of the low power Atom CPU in the third quarter of 2009.

There aren’t a ton of details available at the moment, but it looks like the new chips will come in single and dual core flavors and continue to use hyperthreading, which means your operating system will likely report 2 or 4 processors. You will not, however, see the kind of performance boost you would expect from a true quad-core CPU, but hyperthreading does provide a small performance bump when running some applications.

The current generation Atom CPU uses a single core chip with hyperthreading and does seem to offer pretty decent performance without putting much strain on your battery. Unfortunately the roadmap doesn’t say anything about the power draw of the new chips, so I don’t know if you’ll take a battery life hit along with the promised performance increase.

[via Engadget and Register Hardware]