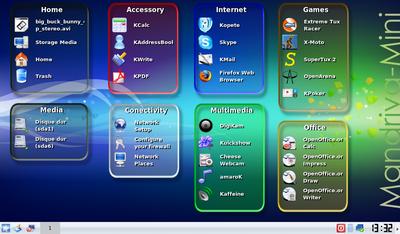 For the last few days I’ve been puzzled by a press release announcing that Mandriva had launched a new version of its Linux distribution specifically tailored for netbooks. Puzzled because for the life of me, I couldn’t find a download link. But after doing a little more digging (and waiting for Mandriva to post a more thorough release on its own site), I think I’ve figured out why I can’t download Mandriva Mini and slap it on my Eee PC 1000H. I’m not supposed to.

Mandriva Mini is a customized version of Mandriva Linux that the company is targeting at computer makers looking for an operating system to install on netbooks. It’s not really geared at end users (unless you count the fact that end users will ultimately the folks who umm… use the software in the end). Thus, no download link. But you will soon be able to pick up a netbook with Mandriva Mini pre-installed. The first netbook expected to run the operating system is the Emtec Gdium.

Like Linpus Linux Lite, Asus’s custom version of Xandros, and Ubuntu Netbook Remix, Mandriva Mini also has a custom interface designed to make it easier to launch programs and perform other tasks on a computer with a small screen. I found the picture of Mandriva Mini posted above at French site Clubic.

I have to say, I’m not really that impressed with the way applications are grouped together. But I’m also not a huge fan of the Xandros easy mode. I prefer an old fashioned start menu, or better yet a keyboard program launcher like Launchy for Windows or Gnome-Do for Linux. But blogger Sascha Pallenberg, who got a chance to play with a pre-production Emtec Gdium netbook running what I can now say appears to be Mandriva Mini, says it was one of the best Linux distrubitons he’s tried on a netbook so far.

I’d like to see Mandriva release Mandriva Mini to end users looking for an alternate OS to load on their netbooks. But the advantage of working with OEMs is that you can ensure the operating system works properly on the hardware before it ships rather than troubleshooting after it’s already been installed on unsupported hardware.

In the meantime, you can always install the full version of Mandriva on your netbook. The latest version of the operating system supports the Eee PC 701 out of the box. And with a little tweaking, you can get it to run on newer hardware like the Eee PC 901 or 1000.

10 replies on “Mandriva Mini: Another custom Linux distro for netbooks”