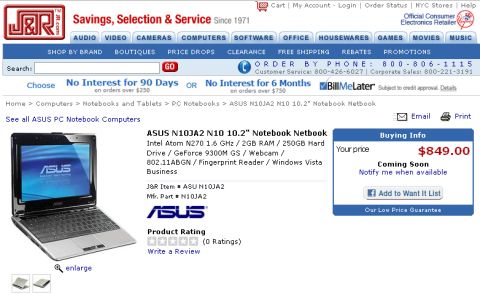 I’m thinking I might have to stop covering the upcoming Asus N10 laptop. While it has a 10.2 inch display like the Asus Eee PC 1000H and several other netbooks, there are a few other defining characteristics that indicate this machine ain’t targeted at the same customers as the $550 Eee PC 1000H. First up? The price. J&R is showing a $849 price tag for the N10 which makes it more expensive than most full sized Windows laptops you might want to pick up.

The extra $300 you’d pay for an N10 doesn’t go to waste. The computer packs a 250GB hard drive, 2G of RAM, and a NVIDIA GeForce 9300M GS video card as well as a fingerprint scanner. It also runs Windows Vista Business although I wouldn’t be surprised to see Asus offer a Windows XP downgrade option.

But I have a hard time putting an $850 computer in the same class of device as a $299 Eee PC 701. If the definining characteristics of netbooks are low price, portability, and the ability to connect to the internet, the N10 meets two of those categories but fails miserably on the third. Not that there’s anything wrong with that. I just thing it means that Asus has graduated from making notebooks that are solely netbooks to producing laptops that are high performance ultraportables. Of course, take “high performance” with a grain of salt. The N10 sports the same single core Intel Atom CPU that you can find in the lower end Eee PC 900/1000 series computers.

4 replies on “Asus N10 pushes the limits of netbookdom”