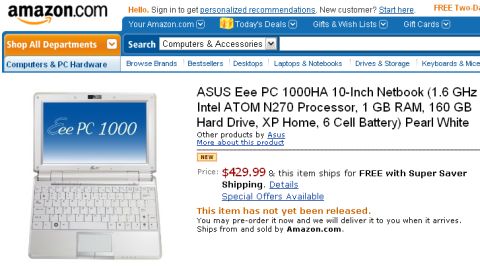 Asus is apparently poised to launch yet another laptop in its never-ending line of Eee PC models. The Asus Eee PC 1000HA, now available for preorder at Amazon in black

As you’ve probably guessed, Asus had to cut a few corners to keep the price down. According to the Amazon listing, the Eee PC 1000HA does not have built-in 802.11n or Bluetooth support, both of which are featured in the 1000H. But if those features aren’t important to you, this looks like one heck of a bargain.