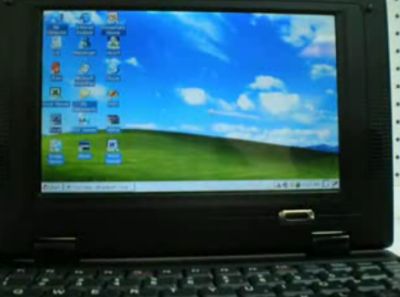 With Quarta announcing plans to shoehorn Windows CE onto netbooks including the Acer Aspire one and Lenovo IdeaPad S9, I decided it was time for another look at a netbook that’s actually designed to run Windows CE. The 3K Razorbook 400 (which goes by many different names in many different countries) is a tiny little notebook, even by netbook standards, with a 7 inch screen, a 400MHz CPU, and 4GB of SSD. While most models currently run a custom version of Linux, 3K plans to release a model running Windows CE soon.

You can check out a video of a 3K employee demonstrating the device after the break.

While Windows CE may not be able to run all the programs that work with Linux or Windows XP, it is a capable little operating system that has the basic look and feel of Windows. It’s got a start menu, taskbar, and system tray. It boots in 10 to 20 seconds. And the version that will ship with the Razorbook 400 will have viewers for Word, Excel, and PowerPoint files, although you’ll probably want to invest in sometihng like SoftMaker Office if you want a full fledged office suite that lets you edit and create documents.

Perhaps most importantly, the version of Internet Explorer that comes with the Razorbook supports Flash 9 content, which means you can watch most online video and interact with other web sites. The biggest problem I’d run into with prior handheld computers running Windows CE was that the web browsers were next to useless. The other problem was that the operating systems were rarely upgradeable. I have no expectation that you’ll be able to upgrade the Razorbook 400 from Windows CE 6.0 to Windows CE 7.0 when it becomes available.

But because there’s already at least one Linux distro designed for this hardware and a group of dedicated hackers working on developing more software for it, if you get tired of Windows CE or find that it’s outdated in a year or two, perhaps you’ll be able to change the OS.