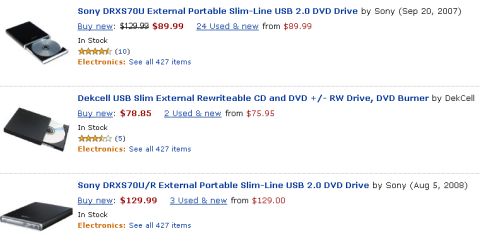 Remember floppy disks? Once upon a time, every computer came with a floppy drive for saving files and loading documents. Now you’ll be hard pressed to find a PC with a floppy disk drive thanks to the prevalence of CD, DVD, and even Blu-Ray drives.

But we could be moving toward a world where even optical disc drives are obsolete. If you have a broadband connection, it’s easier to download and install many free and commercial applications from the web. The same goes for media like music and movies.

While a few years ago it was hard to imagine a computer without any sort of floppy or optical drive, it really doesn’t seem like that much of a sacrifice today. So it should come as no surprise that one of the first things companies like Asus, HP, Acer, and Lenovo dropped from the current generation of netbooks was the disc drive. It’s much easier to make a portable system if you don’t need to shove a bulky disc drive into the chassis.

But what do you do if you want to watch DVDs, install software that only comes on a CD, or change the operating system on a netbook? There are certainly ways to accomplish most of these tasks without an optical disc drive. But having installed operating systems on several ultraportables using a USB flash drive and a second computer, I have to say, things go a lot more smoothly and quickly if you just have a USB DVD drive that you can plug in to your PC.

Apparently I’m not the first person to come to this conclusion. DigiTimes reports that external DVD burner sales are up in Taiwan thanks to the surge in low-cost ulrtaportable sales.

Some people might want to pick up an optical disc drive for use on the road, but I imagine most folks who buy one want it for the same reason I do: installing software at home. Most of the time my external drive hangs out in a box on a shelf. I just pull it out when I need it.

I envision a future where optical disc drives are entirely optional. In fact, some of us are probably already living in that future. But for many folks, the future is still tomorrow, not today. Broadband isn’t exactly universal yet, which means that while some of us can download the latest version of Ubuntu in under an hour, other folks might have to wait days or weeks to download a 600MB file on a dialup modem. Or they could just request a free disc from Canonical and pop it into a $70 USB DVD drive.

9 replies on “Netbooks driving up demand for USB DVD burners”