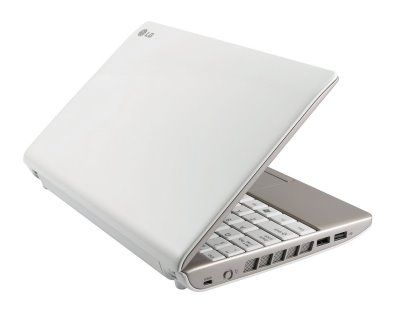 LG has released a press shot few more details about the company’s upcoming X110 liliputer. But just a few. Yesterday we discovered that the PC would pack an Atom CPU, 3G wireless support, WiFi, and a 10 inch display. Now it looks like we can add an 80GB hard disk to the mix.

And thanks to some hands on photos from Engadget, I can tell you the computer also appears to have an SD card reader, VGA output, a webcam, Ethernet jack, and 3 USB ports at least 1 USB port (for some reason they only photographed it from the right side, not the left).

You can also check out the official press release, but there’s not a whole heck of a lot of info in it.

Update: Engadget got a few more details, including the fact that the computer has a 120GB HDD or an optional 6GB SSD. There’s also an option to get an internal GPS unit.