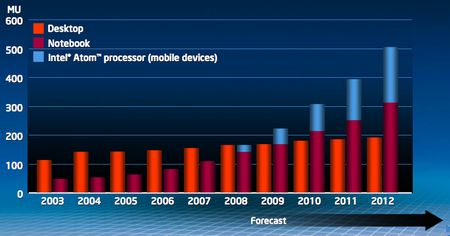 Intel has expected notebooks to overtake desktops in sales in the next few years for a while. But what Intel hadn’t originally counted on was the new low cost, ultraportable class of notebooks. It’s likely that most people who buy a cheap mini-notebook like the Asus Eee PC or Lenovo IdeaPad S10 are picking one up as a second or third computer. And that has helped increased notebook sales overall.

While Intel had predicted that notebooks would take the lead in computer sales in 2010, netbooks are helping to move up that schedule. Intel says as many laptops will be sold this year as desktops, when you include mini-notebooks in that equation. And in 2009, more notebooks will be sold. That’s not to say there’s no room for growth in the desktop market. There are still plenty of people who don’t have a computer at all, or who need to replace an older desktop. But Intel and others predict that laptop sales will grow at a much faster pace than desktop sales over the next few years.

Of course, Intel is also just trying to play up its own area of expertise. The chart above makes it look like all mobile computers will be powered by the Atom CPU. But some devices will certainly be powered by VIA chips, and AMD may decide to get in on the action as well.