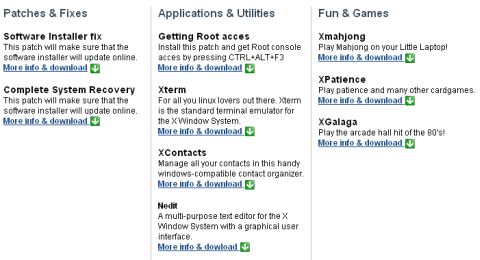 Menno Dijk has uploaded a series of useful applications for anyone using a “little linux laptop.” These laptops go by many names, including the 3K Razorbook 400, the Skytone Alpha 400, the Bestlink Alpha 400, and the Yinlips Micro PC. But they’re all basically the same device, and if yours is running Linux, odds are you’ve been having a hard time figuring out how to do basic things like pull up a terminal with root access.

The site also has a handful of open source games and utilities including a contact manager and a text editor. While this tiny laptop isn’t exactly going to give the MSI Wind a run for its money in the looks or performance departments, it’s hard to beat the price. You can pick one up for under $200.