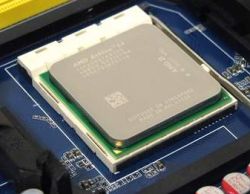 The folks over at Tom’s Hardware decided to cut through a bit of the buzz over Intel’s latest low-power CPU by comparing the Atom with a much older AMD Athlon 64 2000+ processor. The results? You can underclock the Athlon CPU a bit and get better performance and lower power consumption than you’d get from the Intel Atom chip. But there’ s a catch — the AMD chip is designed for desktops, not laptops.

Now, Tom’s Hardware did its best to make an apples to apples comparison. The Atom chip they pitted against the AMD was the Intel Atom N230 processor, which is the desktop variant of the N270 found in little laptops like the Asus Eee PC 901. So you might be able to make a case that the Eee Box should be using an Athlon CPU instead of an Atom. But it’s unlikely you could fit the Athlon 64 2000+ in a netbook case. The chip is about three times larger than the Atom N230. And space is at a premium in computers like the Acer Aspire One, Asus Eee PC 901, and MSI Wind.

So it’s probably safe to say that if and when AMD decides to release a chip designed for the netbook market, it will be a new chip, not a repurposed older model like the Athlon 64 2000+.