Smartphones have largely replaced portable media players for most people. It’s been a few years since Apple bothered to update its iPod touch, and it’s been even longer since I’ve seen any other company try to offer a good Android-powered alternative to Apple’s touchscreen media player.

Sometimes it can be useful to have a device that doesn’t make phone calls, send text messages, or do anything else that requires paying a monthly fee.

Sure, you could pay $199 or more for an iPod touch. But you could also just buy a cheap Android phone… and then not activate it. That option could save you as much as $180, because Walmart and Best Buy are each selling surprisingly decent Android phones for as little as $20.

It’s not going to win any speed awards, but it’s more than capable of functioning as a small, cheap media player, web browser, or handheld device for casual games.

I actually picked one up recently, and it suffers from limited screen viewing angles and the audio quality from the headphone jack isn’t superb, but it’s certainly acceptable for a $20 device.

Best of all, if you disable WiFi and enable Android’s battery saver mode, you can get stellar battery life. After playing music for more than 5 hours with the screen on, the Pixi 4 was reporting that it still had 63 percent of its battery capacity left to burn through. Oh, and the battery is user replaceable, something that’s not true of many phones that are significantly more expensive. 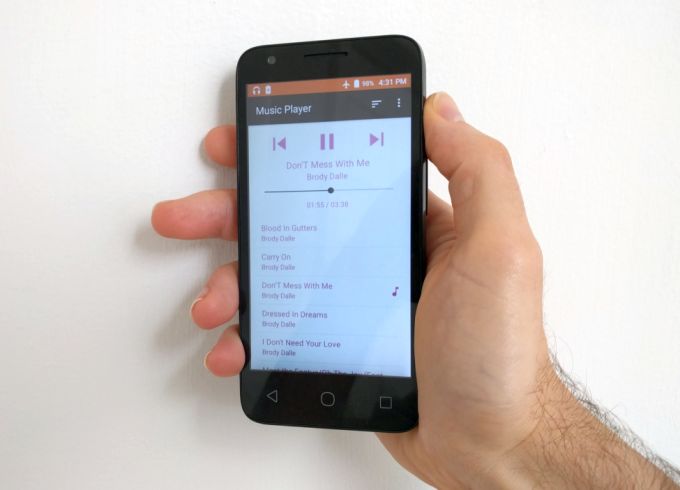 So what’s the catch? This phone is locked to Walmart’s Family Mobile service. So if you do plan to use this $20 Pixi 4 smartphone as, well, a phone… then your only choice is to use it with Walmart’s pre-paid wireless network (with plans starting at $25 per month).

The $20 price is also technically a discount. The phone has a list price of $40, and other stores are selling similar Alcatel smartphones for even more. So you may not always be able to pick up a Pixi 4 for this price. At $20, it’s a steal. But I’m not sure I’d recommend this phone for $60 or more when there are significantly better phones available in that price range.

Like the Walmart Pixi 4, the ZTE Midnight Pro 4G LTE is locked to a budget wireless carrier. In this case, the phone is designed for use with Simple Mobile, a pre-paid carrier with plans that start at $26 per month.

But like the Pixi 4, this is a phone you should be able to use without activating the cellular service.

It’s a little larger than the Alcatel phone, but has a bigger battery. On the down side, the ZTE phone ships with Android 5.1, which is an older version of Google’s mobile operating system. I wouldn’t really expect either phone to get any major software updates.

Both phones include the Play Store

These phones both support Google Mobile Services, and come with the Google Play Store pre-installed. That means you have access to millions of Android apps out-of-the box.

If you’d prefer not to login with a Google account or use the Play Store, you could also set up the phones with a third-party app store like F-Droid.

That way if you lose the phone while out on a run, you don’t have to worry about someone gaining access to your personal data. Or you could give the phone to a kid without worrying that they’ll start purchasing paid apps without your permission.

A few other notes

I haven’t personally used the ZTE Midnight Pro 4G LTE yet, so I can’t say how it compares with the Pixi 4 in terms of audio quality, screen viewing angles, or battery life. But there is one thing the Midnight Pro has going for it: Best Buy’s website allows you to buy as many as 5 phones, while Walmart will only let you purchase 2 Pixi 4 phones.

The reason I know that is because, as I mentioned recently, I’ve been in the market for some cheap MP3 players to use as part of an upcoming multimedia exhibit in Philadelphia. While I really like the super-cheap Simplicity Fashion Pocket MP3 Player, it doesn’t have a display. And ultimately we decided a portable music player with a screen would be preferable.

After looking for a good portable media player in the $20-or-less price range, I ultimately realized that a cheap phone would be the best option since it would have a larger, easier-to-read display and the ability to run a variety of apps. It’s also more likely that I’ll be able to find a use for these phones after the exhibit closes.

Look, I’m not saying these are good phones, or even particularly good portable media players. But they meet my needs at the moment, and they’re way more versatile than any $20 device really has a right to be… probably because they’ve got more than $20 worth of hardware under the hood. A big part of the reason they’re sold this cheap is because Walmart, Best Buy, and Simple Mobile expect you to sign up for cellular service. But you don’t have to.

I’ll update this post with some notes about the ZTE phone after I’ve had a chance to test one.