Barnes & Noble’s newest $199 tablet officially hits the streets November 8th, but customers who pre-ordered the NOOK HD could receive their tablets as early as this week.

The NOOK HD has a 7 inch screen and a starting price of $199. That alone wouldn’t be enough to set it apart from the Amazon Kindle Fire HD or Google Nexus 7 tablets — but B&N has given its new tablet one of the best displays on the market, a distinctive design, and a custom Android-based operating system resigned for reading books, viewing movies, and running apps.

The early reviews are starting to come in and they’re… well, a bit mixed. 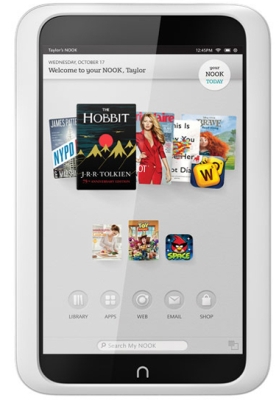 On the one hand, reviewers seem to love the 7 inch, 1440 x 900 pixel display which handles a wide range of colors and viewing angles quite well. On the other hand, the speakers are quiet and the operating system feels sluggish when launching apps and performing some other tasks.

While the NOOK HD operating system is based on Android 4.0 Ice Cream Sandwich, B&N has modified the software with a custom user interface, support for multiple user accounts (so your kids can login and see their own apps and games, and you can login to see your own content), and other changes.

The biggest thing setting the NOOK HD apart from the Nexus 7 or most other Android tablets is that instead of using the Google Play Store to find apps, music, movies, books, and other content, the B&N tablet uses B&N’s own stores. If you’re already a B&N customer that might seem like a big selling point — but you can also just install the NOOK app on a Nexus 7 or other tablet to access your eBooks.

Still, the NOOK HD reportedly offers a great viewing experience thanks to a solid eBook app, the excellent display, and a design that has a wide bezel.

That’s right — while people love to poke fun at wide bezels, every B&N tablet to date has had one, and that’s because it gives you something to hold onto while spending hours holding a tablet in your hands to read a book. That’s the reason I kind of prefer the NOOK Tablet on my desk to the Amazon Kindle Fire sitting next to it — even though I prefer Amazon’s content system.

Anyway, the display and design seem to be firmly in the pro category for this tablet, as well as support for the UltraViolet video platform (if you buy a movie from any provider that supports the platform, it will be added to your NOOK HD digital video library).

The NOOK shop also now has 10,000 apps. That’s a drop in the bucket compared to some of the company’s top competitors, but it’s good to see the selection of apps growing.

In the cons category goes the lack of a camera (if that matters to you), a limited selection, and sluggish performance.

Here are some of the first reviews I’ve seen:

If you’re thinking of picking up either model in the hopes of dumping the default operating system and installing CyanogenMod or another custom version of Android, it could be a while before that’s possible. B&N has been making a habit of locking down the bootloaders of its latest tablets and I don’t expect the new models to be any different.

The company sells its tablets at or near the price it costs to build them and counts on making money by selling books, apps, and other content. So it’s not surprising that B&N would want customers that buy its tablets to run the software that includes its app and content stores.

Last year’s NOOK Tablet also shipped with a locked bootloader, but that hasn’t prevented users from figuring out how to root the tablet and install the Google Play Store and custom ROMs. But there’s no guarantee anyone will figure out how to do that on new models… especially since the NOOK HD is hardly the only inexpensive 7 inch tablet around. If you’re looking for a hackable device, there are plenty of alternatives on the market.