There are a growing number of Chromebooks that can now run Linux applications thanks to Google’s Project Crostini. And when I say growing number, I mean that this week Google added support for 18 Chromebooks.

In a nutshell, if you have a Chromebook with an Intel Apollo Lake processor, you should be able to enable Linux app support after switching to the Developer channel.

As noted by xda-developers, the list of newly supported models includes Chromebooks from Acer, Asus, Dell, and Lenovo. 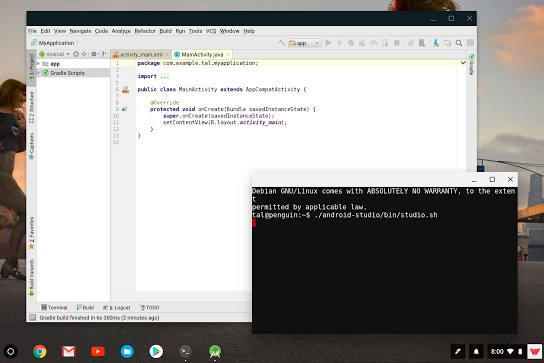 Folks have been installing Linux on Chromebooks for almost as long as Chromebooks have been a thing. But usually that required loading the full operating system to run alongside Chrome OS.

Crostini is a set of tools that allows Linux apps to run in virtual machines that are sanboxed from the core operating system, but which can interact with the OS so you can move files between native apps an Linux apps, for example. You’ll also be able to see shortcuts for Linux apps in the launcher as if they were native apps.

While the feature is aimed at developers who want to be able to use Linux tools on a Chromebook, it could make it easier for end users who appreciate Chromebooks for their speed, simplicity, and regular security and feature updates… but who sometimes need to run powerful native apps for audio, video, or document editing or other tasks. You could even run the Firefox web browser if you wanted to.

When Google started testing Crostini earlier this year, it only supported the Google Pixelbook. But earlier this month Google started adding support for additional devices, such as the Samsung Chromebook Plus. But the move to enable support for Apollo Lake-powered Chromebooks dramatically increases the number of entry-level and mid-range Chromebooks that can run Linux apps… if you’re willing to run the Developer Channel on your Chromebook and jump through some hoops.