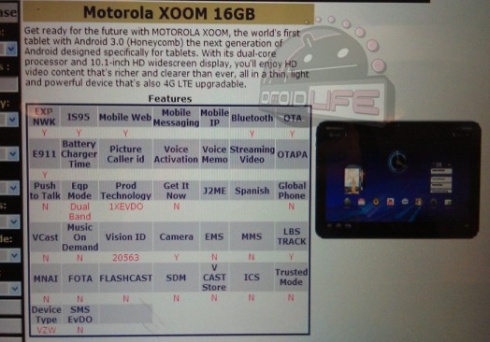 The Motorola XOOM android tablet is currently going for between $599 and $799 for a model with 32GB of storage. But the folks at Droid Life snagged an image from a Verizon inventory system suggesting that a new 16GB model is on the way.

There’s no word on how much the new model will cost… but it seems safe to assume that it should be cheaper than the 32GB version of the tablet. In fact, it could be quite a bit cheaper. While 16GB of Flash-based storage isn’t all that expensive these days, Apple and other companies tend to charge as much as $100 more for 32GB tablets than they do for 16GB models.

The rumored 16GB Motorola XOOM will ship with a 3G modem, but it will be upgradeable to Verizon’s faster 4G LTE network just like the 32GB tablet.

What I’d really like to see is a 16GB version of the Motorola XOOM WiFi, which could theoretically be priced as low as $500 or less. Currently Motorola’s tablet sells for $589 and up when purchased without mobile broadband connectivity.