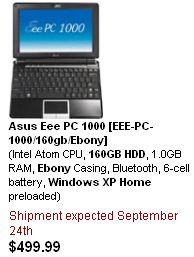 But it looks like there could be a third (or fourth) Eee PC 1000 model on the horizon. Dynamism is taking pre-orders for what it calls an Eee PC 1000 with a 160GB hard drive. My guess is that this model will actually bear the 1000H name, but Dynamism seems to group all of the 1000 series computers together under one heading.

The site is taking pre-orders for $499, which is about $50 more than the current price for an 80GB unit. The new 160GB models should be available by September 24th.