But what if you want a really tiny computer and the ability to use it with a bunch of ports? You could pick up a USB hub. Or you could opt for MakerSpot’s new Raspberry Pi Zero Docking Hub, a stackable module that you can attach to a Zero to add just about everything you’d get with a Raspberry Pi Model B.

MakerSpot has launched a Kickstarter crowdfunding campaign for the new hub, and plans to ship hubs in January to backers who pledge $20 Canadian (about $15 US). 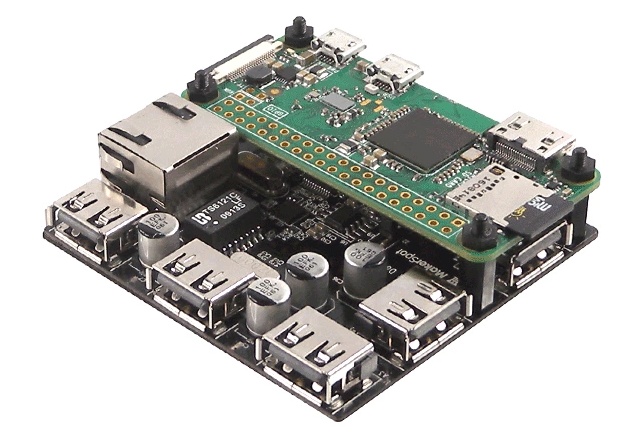 It has a set of pogo pins that allow you to snap a Raspberry Pi Zero to the board without using any of the Pi Zero’s ports and without soldering… making it easy to detach the computer if and when you want to use it without the hub.

MakerSpot notes that there’s at least one good reason to consider picking up its hub and using it with a Pi Zero rather than just buying a Model B device: the USB ports on the hub are spaced further apart than those on a Raspberry Pi Model B, making it easier to connect multiple USB devices including chunky flash drives.

And one advantage over using a typical USB hub is that power is delivered to the Pi Zero through the hub, not the other way around. Since the little computer doesn’t have to send power USB accessories it reduces the risk of overloading the device.