The Lenovo Yoga Chromebook C630 is a notebook with a 15.6 inch toucshcreen display, a 360-degree hinge, Google’s Chrome operating system, and support for up to a Core i5-8250U processor, up to 8GB of RAM, and up to 128GB of eMMC storage.

First unveiled in August, the Yoga Chromebook C630 is listed as “coming soon” on the Lenovo website. But you can already pre-order one from Best Buy for $699. 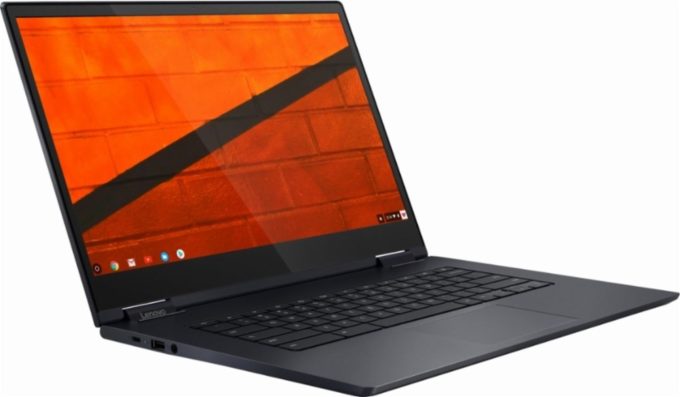 That’s the price for a Core i5/8GB/128GB model featuring a 1920 x 1080 pixel display, but Lenovo is expected to offer cheaper and pricier configurations: the company will also offer high-end models with 4K displays and cheaper versions with FHD screens and 64GB of eMMC storage. Prices are expected to start at $600.

The laptop has an aluminum chassis and features slim bezels around the display, making the Yoga Chromebook C630 relatively compact for a 15.6 inch notebook. It measures 14.2″ x 9.8″ x 0.7″ and weighs 4.2 pounds.

Lenovo equips the laptop with USB Type-C ports, a USB 3.0 Type-A port, a microSD card reader and a headset jack.

Other features include stereo speakers, a 56 Wh battery (Lenovo says it’s good for up to 10 hours of battery life), 802.11ac WiFi and Bluetooth.

According to the Best Buy website, the Chromebook Yoga C630 should begin shipping October 21st.