Intel may be getting ready to launch its cheapest, lowest-power desktop computer to date. The company is best known for making processors, but for the last few years Intel has also been selling tiny desktops as part of its NUC (Next Unit of Computing) brand.

The company recently introduced new models based on its Haswell processor family, designed to offer better performance and lower power consumption than their predecessors.

But it looks like Intel could also be planning to launch at least one NUC computer featuring a low-power Bay Trail processor — and it should have a low price tag too. 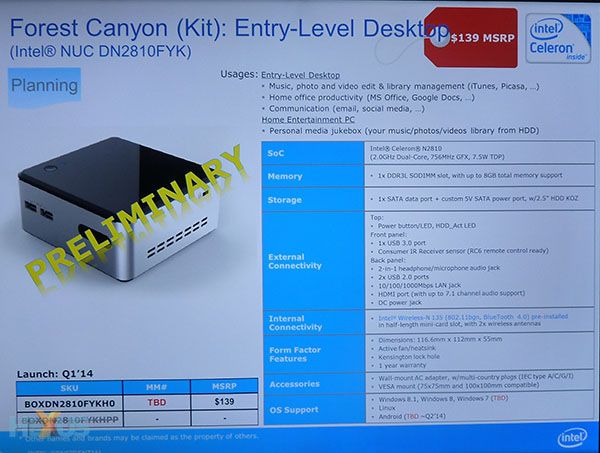 Since the Silvermont and Bay Trail processors feature Intel HD graphics and a serious performance boost over earlier Atom chips, the Forest Canyon system would probably make a decent home theater PC or even an entry-level desktop computer.

The best part? It’s expected to have a suggested retail price of $139.

That price probably won’t include memory, storage, or an operating system. But it sounds like you’ll probably be able to pick up a cheap barebones system and build a fully-functional Linux or Windows PC for around $300 to $400.

It’s expected to come with 802.11b/g/n and Bluetooth 4.0 pre-installed, and it officially supports Windows 7 and later and Linux. Android support is listed as coming sometime around the second quarter of 2014. While that might seem to be a long time away, Hexus reports the Forest Canyon computer probably won’t ship until the first quarter of 2014, so official Android support is likely to come shortly after launch.