Want an Amazon Echo device with a screen, but don’t want to spend $230 on an Echo Show?

The Echo Spot is a smaller, cheaper model. It goes up for pre-order today for $130 and ships in December.

It kind of reminds me of the ill-fated Chumby, but Amazon is positioning it as more of a smart, voice-controlled alarm clock with a 2.5 inch display. 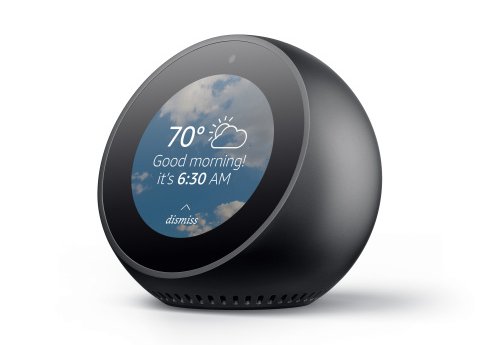 The Echo Spot can do just about everything other Echo devices can. You can use it to listen to music, get news updates, play games, or interact with thousands of Alexa skills.

Since it has a display and a front-facing camera, you can also use it to make voice and video calls, the same way you would with the Echo Show. But since it has a rather small screen, it’s probably not the ideal device for watching videos (which means you won’t miss YouTube now that Google has pulled the plug on YouTube videos for Echo devices).

You can also use it as an alarm clock, a controller for smart home products, or feeds from a connected home security camera.

While the Echo Spot has a built-in 2 watt speaker, it also has a 3.5mm audio jack and Bluetooth, allowing you to connect external speakers for better sound.

The whole thing measures about 4.1″ x 3.8″ x 3.6″ and weighs about 15 ounces, making it less than half the height and weight of an Echo Plus smart speaker.

via Amazon, @rycrist and The Verge