A decade ago there was pretty much no such thing as a cheap, tiny laptop computer. Sure you could find plenty of inexpensive portable computers. And you could find some tiny models like the Toshiba Libretto line. But until netbooks hit the scene in 2007 you pretty much had to choose between cheap or tiny.

In early 2014 netbooks are a fading memory as PC makers push tablets, laptops, smartwatches, and other new devices.

But the legacy of the netbook lives on: Want a cheap and tiny laptop? No problem. Most major PC makers offer at least one device that fits the bill. 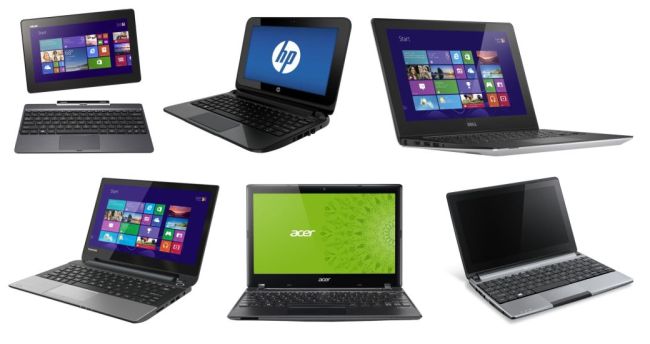 Here are 10 modern Windows laptops with 11.6 inch or smaller displays and price tags of $400 or less.

Note that this list doesn’t include Chromebooks or notebooks that ship with Linux. But bargain hunters can often find even better deals on mini-laptops by grabbing a model that comes with Chrome OS or Ubuntu.

The Transformer Book T100 is a 2-in-1 device which you can use as a tablet or a notebook. The processor, memory, battery, and all the other important bits are in the tablet section, but the system comes with a keyboard that effectively turns the 10 inch tablet into a notebook. 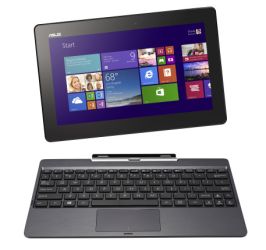 While many tablet makers offer optional keyboards, every Transformer Book T100 comes with a keyboard, which is why I feel pretty comfortable including it in a list of laptops.

When I reviewed the T100, I was also quite impressed with its performance, battery life, and overall value. The 8 hours of real-world battery life is also nothing to sneeze at.

The tablet and keyboard combined weigh about 2.4 pounds and measure about 0.9 inches thick.

There’s also a $349 model which has a 32GB solid state drive, but it’s worth paying a bit extra for the additional storage if you plan to use this device for serious work.

Asus also offers a cheaper laptop with a touchscreen display and an AMD “Temash” processor. The Asus X102BA doesn’t have a detachable tablet, but it does have 2GB of RAM, a 320GB hard drive, and AMD 8180 graphics. It has a 1366 x 768 pixel display. 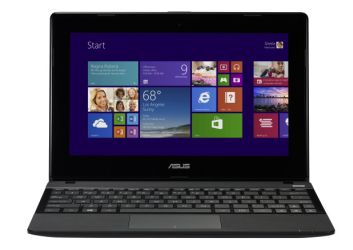 The AMD A4-1200 processor isn’t exactly a speed demon, but it’s a relatively low power chip and Asus promises up to 5 hours of battery life. As usual, you should take the manufacturer’s estimate with a grain of salt.

This model has a list price of $299, but you can often find it for a bit less. In fact one the best deals I can find is for the related Asus F102BA which has 4GB of RAM.

The Asus X102BA weighs about 2.4 pounds and measures 1.1 inches thick.

Basically this is HP’s equivalent of the Asus X102BA. 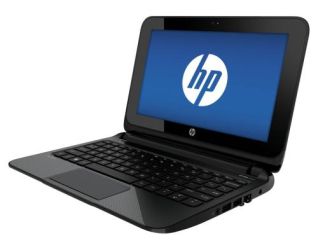 It’s a notebook that weighs 3.2 pounds, measures about 0.9 inches thick, which makes it a bit thinner, but heavier than the Asus model.

Gateway (which is owned by Acer) offers a 10 inch touchscreen laptop called the LT41P which comes in a few different versions. While they have list prices between $330 and $400, you can often find this model for much less.

The notebook features an Intel Celeron N2805 processor, which is based on the same Bay Trail technology as the Atom chip in the Asus Transformer Book T100, but which should offer moderately better performance. 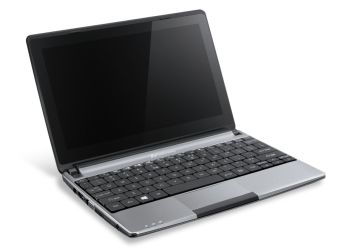 It measures 2.4 pounds, measures about 1.3 inches thick, and Gateway promises “up to 5 hours” of battery life.

The Lenovo Flex 10 is a touchscreen laptop that has a flexible hinge that lets you rotate the screen 300 degrees so it’s facing away from the keyboard. You can’t quite push the screen back 360 degrees to use the machine in tablet mode, but you can use it as a sort of desktop, or presentation kiosk-style machine. 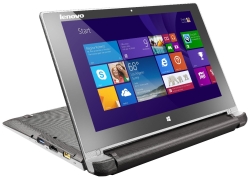 Lenovo says the laptop supports Intel Celeron and Pentium Bay Trail processors, 2GB to 4GB of RAM, and up to 500GB of storage.

The most common model I’ve found features an Intel Celeron N2806 CPU, 2GB of RAM, and a 320GB hard drive. It gets up to 4 hours of battery life.

Asus has been offering a line of portable touchscreen Windows laptops with 11.6 inch displays since late 2012. It’s a bit hard to keep track of all the different models, because they’re sometimes sold as the VivoBook X200, Q200, F200, or S200 series. 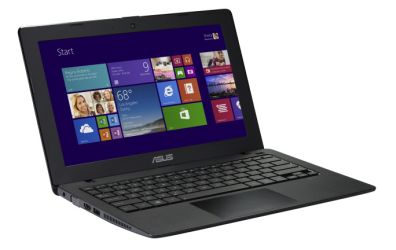 Some models feature Intel Celeron processors while others have Pentium or Core i3 chips. Here are a few models that provide a decent value:

At first glance, this laptop looks a lot like the models listed above. But it’s a newer laptop featuring an Intel Celeron N2815 dual-core processor based on Bay Trail technology. 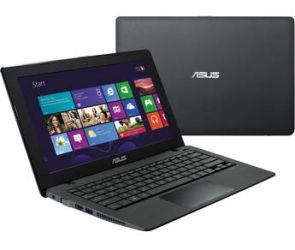 Note that B&H says the laptop has 2GB of RAM, but most other retailers say it comes with 4GB.

Acer’s Aspire V5 is another model that comes in a variety of configurations. I’ve seen models with Intel Celeron and AMD A4 or A6 processors. There are even models that ship with Linux instead of Windows. 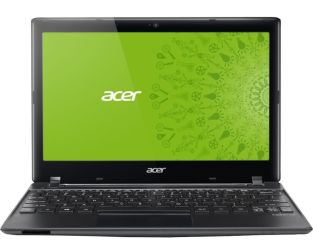 Here are a few models selling for under $400:

Dell was one of the early players in the netbook space, and while the company doesn’t currently sell anything that would meet the definition of a netbook, Dell does offer this portable, affordable laptop. 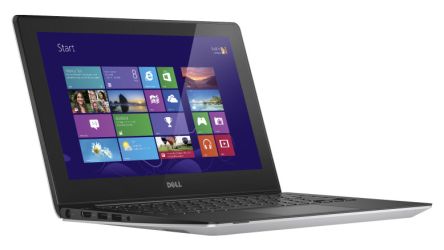 The notebook is powered by an Intel Celeron 2955U Haswell dual-core processor and features at least 2GB of RAM and a 500GB hard drive.

Dell promises about 8 hours of battery life, and the notebook has a decent array of ports including an SD card reader, 2 USB 3.0 ports, 1 USB 2.0 port, HDMI and Ethernet jacks.

While the notebook has a list price of $379, it’s often available for a bit less than that.

Toshiba’s 11.6 inch laptop has an Intel Celeron N2810 Haswell Bay Trail processor which is a 7.5W chip that uses about half as much power as the Haswell-based Celeron 2955U found in Dell’s laptop. But Toshiba only promises up to 4 hours of battery life from this thin and light laptop. 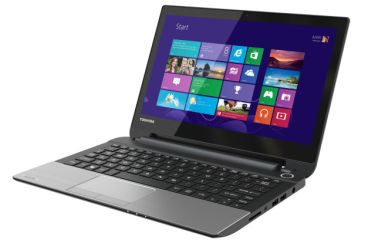 The notebook measures about 1 inch and weighs 3.3 pounds.

Like Dell’s notebook, the Toshiba NB15t has a list price of about $380, but regularly sells for less.

Lenovo is another company that’s been offering affordable thin and light laptops since near the start of the netbook age. In early 2014 most of the company’s 10 inch products are tablets. But you can still find affordable portable PCs in the company’s 11.6 inch S Series. 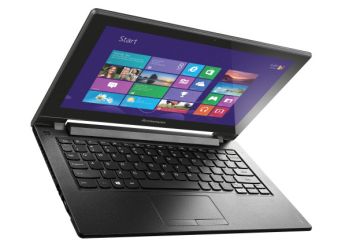 If you want a model that sells for under $400, you’ll usually have to opt for the Pentium version. But the Core i3 laptop isn’t much more expensive, and sometimes you can find one that sells for well below its $500-ish list price.

Lenovo also offers a similar 11.6 inch laptop powered by an AMD processor. The Lenovo IdeaPad S215 features a similar design to its Intel counterpart, but this model comes with a choice of an AMD E1-2100 processor or an AMD A4-5000 chip. 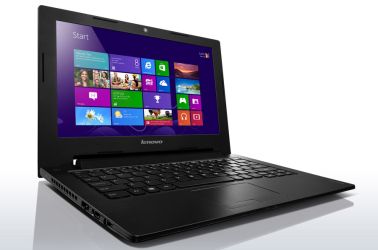 HP offers several 11.6 inch laptops under the Pavilion 11 line including AMD and Intel-powered models. Some are convertible tablets with detachable keyboards or 360 degree hinges that allow you to fold back the screen until you’re holding a tablet.

The Pavilion 11e is neither of those things — it’s cheaper. There are multiple versions of this laptop, but they all seem to feature low-power AMD processors, 4GB of RAM, and 11.6 inch, 1366 x 768 pixel displays. 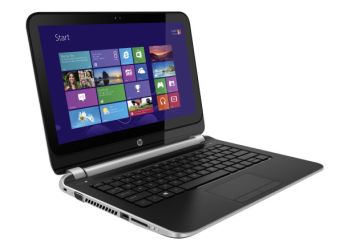 The laptop weighs about 3.1 pounds.

Here are a few models:

HP recently added an inexpensive convertible to its line of portable notebooks. The HP Pavilion 11t x360 looks like an 11.6 inch laptop, but you can push back the display 360 degrees until it’s back to back with the keyboard and hold the computer like a touchscreen tablet. 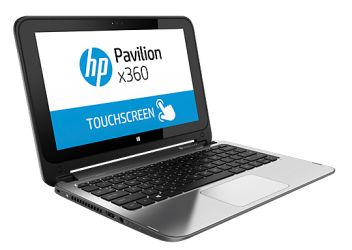 HP promises up to 4.5 hours of battery life which is less than stellar for a tablet, but not bad for a laptop in this price range… especially one that also has a tablet mode. 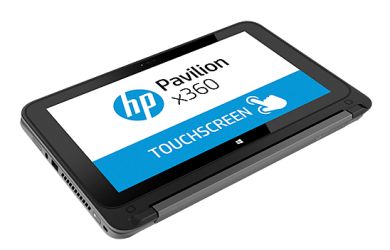