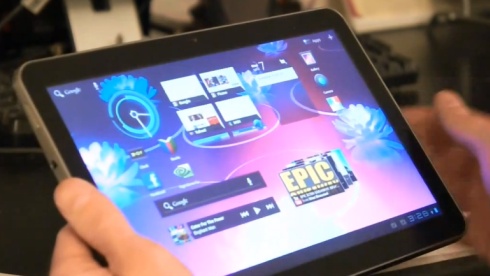 Samsung has been showing off the upcoming Galaxy Tab 10.1 for a few weeks, but the folks at AndroidHD have given us the best look at the tablet so far, with a 12 minute video outlining all the Android tablet’s major features.

To be honest, the new tablet looks a lot like the Motorola XOOM. That shouldn’t be surprising, since they both run Google Android 3.0 Honeycomb, have 10.1 inch, 1280 x 800 pixel displays, 1 GHz NVIDIA Tegra 2 processors, and front and rear-facing cameras.

But the video goes a pretty long way toward showing just what you can do with this tablet, with an emphasis on apps that aren’t available, or aren’t quite as impressive on an iPad, including Google Goggles, Google Maps, and YouTube. And don’t forget the customizeable home screen with widgets, icons, and other goodies.

Interestingly, the portion of the video that looks at video chat shows a somewhat pixelated caller, although I suspect that has more to do with network congestion than the camera.

You can check out the full video after the break. There aren’t any real surprises, but if you’re thinking of picking up any Android 3.0 tablet, the video is practically must-see stuff.

One reply on “12 minute video shows what you’re supposed to do with a Samsung Galaxy Tab 10.1”