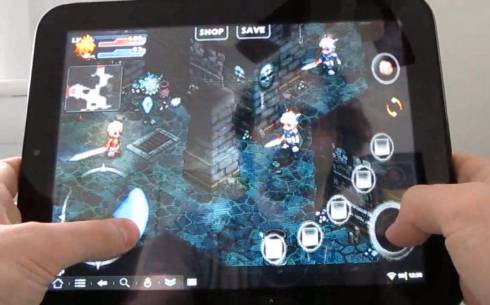 The HP TouchPad is a pretty powerful tablet with a 1.2 GHz Qualcomm Snapdragon dual core processor and a 9.7 inch, 1024 x 768 pixel display. Games look great on the tablet — but unfortunately there aren’t really all that many high quality games available for the webOS operating system that comes with the TouchPad.

That’s where Android comes in. This week the CyanogenMod team released the first public build of Android for the TouchPad, and while it’s still a little rough around the edges, the CyanogenMod software lets you use the Google Android Market to install thousands of games on HP’s tablets.

Some games work better than others.

I took 11 games for a test drive this afternoon, and while some perform flawlessly on the TouchPad, others refuse to run at all, or look funny on the tablet’s 1024 x 768 pixel screen. The display may be the same size and resolution as the screens on the Apple iPad and iPad 2, but it’s an unusual shape and size for an Android device.

These are the 10 games I tested, by grabbing some popular free apps and a few of my favorite Android games.

There are many more games available for Android which are capable of running on the HP TouchPad. But I was impressed that of the first 11 games I downloaded, only one title simply wouldn’t run on the tablet.

I was able to get Asphalt 5 to run on the TouchPad by running the “Spare Parts” app on the tablet, unchecking the “compatibility mode” option and rebooting. But there was a problem that caused the game to only display on a portion of the screen — and the game thought I was pressing the touchscreen about 3 or 4 inches higher than I was actually tapping — so the game was still pretty much unplayable.

Most of the other games were playable — even if a few had graphics quirks. Not a single game felt slow, and some looked absolutely stellar on the HP TouchPad.

I also found that ScummVM works, as do several classic game console emulators.

8 replies on “11 Android games on the HP Touchpad – video”