After unveiling plans a few months ago to launch a blockchain-enabled smartphone called the Finney this year, Sirin Labs has announced that the phone will be available in November. The company is also sharing more details about how the phone will work and new pictures.

The most interesting thing about the Finney is probably the fact that it has a tamper-resistant cold storage system for keeping your cryptocurrency safe even if some hacks the Android operating system running on the phone.

The second most interesting feature may be the secondary display that slides up from inside the phone when you want to make a crypto transactions. 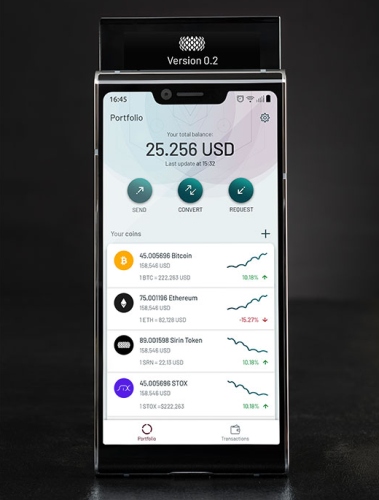 That secondary display is a 2 inch touchscreen called the Safe Screen that’s only used for crypto functions. Sliding up the display activates the storage wallet and there’s dedicated firmware to help keep transactions secure.

Sirin Labs says the Finney’s primary display will be a 6 inch screen with an 18:9 aspect ratio and that the phone features high-end specs including a Qualcomm Snapdragon 845 processor, 6GB of RAM, 128GB of storage, a 3,280 mAh battery an SD card reader, 12MP rear and 8MP front cameras, and a fingerprint sensor.

While the phone is up for pre-order for $1,000, you actually have to pay with SRN, a cryptocurrency created by Sirin Labs.

On the one hand, the idea of having a digital wallet with you everywhere you go is kind of appealing. But it also increases the risk that if you lose or damage your phone, you lose access to all of your currency. So, as Engadget reports, the idea isn’t that you would use the Finney as your only cold storage wallet, but that you would load it up before going out for the day and have access to just the amount of money you think you’ll need.

It sounds like a lot of work… but honestly, so does everything that has to do with cryptocurrency these days.