Big Lots is selling a new Polaroid 7 inch Android tablet with a dual-core processor for $100. It’s not a particularly good Android tablet, but it might be one of the cheapest dual-core models around, and it does run Android 4.1 Jelly Bean.

The tablet’s only available in-stores, but you can find more details in the latest weekly circular. 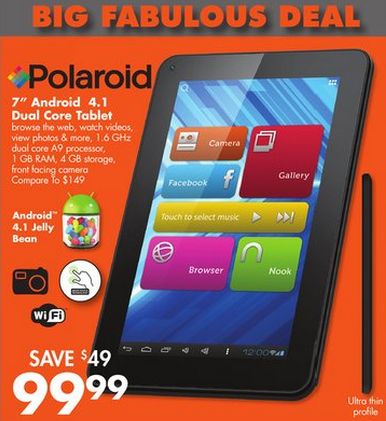 The good news is that the Polaroid PMID720 is dirt cheap, has 1GB of RAM, a microSD card slot, and HDMI output. The less good news is that it has a low resolution 800 x 480 pixel display, just 4GB of built-in storage, a mono speaker, and only a front-facing camera.

It also doesn’t include the Google Play Store, so you’ll either need to find a way to install it yourself or rely on third-party app stores like Amazon’s.

FreakTab forum member picked up one of the tablets recently and reports that the Polaroid PMID720 seems pretty responsive, but screen has poor viewing angles and the battery life is awful. He’s been unable to get more than 2.5 hours of run time.

In other words, you can probably just about watch a movie on the tablet, but by the time the film is finished, so’s the battery.

Polaroid is expected to launch inexpensive tablets with better displays this year, but they’ll probably cost a little more.