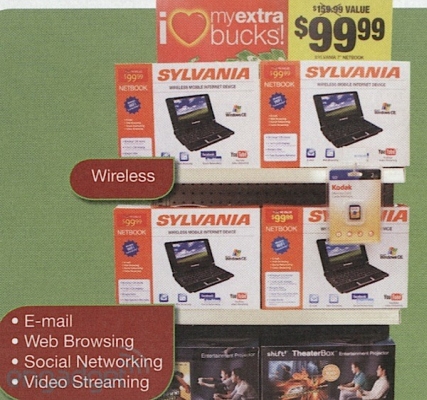 You know how a few years ago a $100 laptop seemed like the stuff dreams were made of? Even the folks at the OLPC foundation never actually managed to bring the price of their revolutionary XO Laptop down to $100. But you know where you’ll be able to pick up a $100 mini-laptop soon? At your neighborhood CVS drug store.

Sure, $99.99 isn’t going to get you a top of the line netbook. Heck, it’s not even going to get you Windows 7 (or XP, for that matter). This little guy will sport Windows CE, and based on the picture I’m guessing it has a 7 inch display, a few gigs of storage space at most, and 512MB or less of RAM. We’ve seen a number of similar machines with low power ARM-based processors over the last few years, although they usually don’t make it to US retail stores.

While the Sylvania netbook looks pretty underwhelming, the price isn’t bad. And to be honest, it’s probably at least as capable a machine as the HP Jornada or NEC MobilePro series of mobile devices which sold for close to $1000 about a decade ago.

Engadget reports that the Sylvania netbook should hit CVS sometime this Fall.