Ultrabooks are thin and light laptops that use Intel processors and solid state disks (or solid state cache) to offer quick boot and resume-from-sleep speeds, among other things.

They’re pretty nice little machines, but when the first ultrabooks hit the streets in late 2011 they tended to have prices close to $1000. 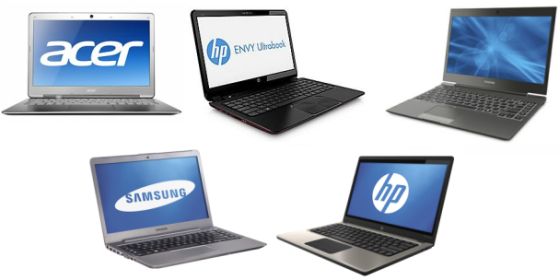 Over the last few months we’ve seen prices fall considerably, and while the average netbook is still much pricier than a larger notebook the difference isn’t as big as it once was.

Here’s a roundup of some great deals on ultrabooks from Acer, HP, Samsung, and Toshiba.

Asus, Dell, Lenovo, Sony, and other companies also offer ultrabooks, but so far I haven’t seen any of those devices drop below the $800 threshold.

Prices on first generation ultrabooks will likely continue to fall as new models hit the scene this year. Intel plans to launch its third-generation Core processors designed for ultrabooks in June and I suspect we’ll see a number of new thin and light laptops from PC makers once that happens.

That’s when we’ll also start to see updated models of existing ultrabooks such as the HP Envy 4T and Envy 6T — which means we may see clearance sales on the models with second generation Core chips in a month or two.