Research in Motion hasn’t officially announced any plans to launch a 10 inch BlackBerry PlayBook tablet, but a member of the Vietnamese Tinhte forum has posted pictures of what appears to be a PlayBook with a 10 inch display.

As you’d expect, it’s larger than the current 7 inch PlayBook, but it also appears to have a 4:3 aspect ratio display, much like the iPad… and much unlike the 7 inch model which has a 1024 x 600 pixel, 17:10 aspect ratio screen. 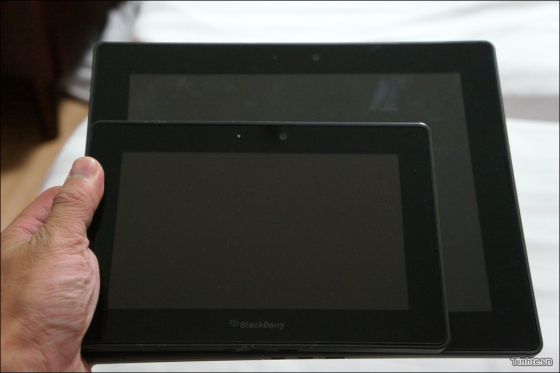 The Tinthe photos don’t reveal many other details about the tablet, other than the fact that it has a 26.82Whr battery and a SIM card slot for mobile broadband.

What we don’t know is whether the new model will ship with BlackBerry PlayBook OS 2.1 or Blackberry OS 10, whether it will use the same TI OMAP4 processor as the current 7 inch model, and how much RIM will charge for the new tablet.

You can currently pick up a 7 inch PlayBook for as little as $200. But RIM is expected to charge $550 for the upcoming PlayBook 4G.