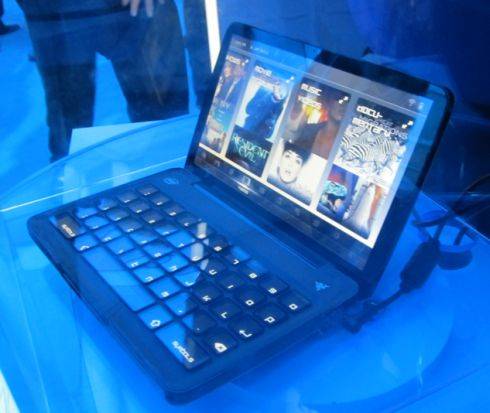 Razer is showing off a new version of the Switchblade portable gaming concept powered by a new Intel Atom chip that Intel hasn’t actually gotten around to announcing yet. Razer has been showing off a prototypes of the Switchblade with a 7 inch display and customizable touch-sensitive buttons instead of a standard keyboard since CES in January. At the time, Razer said it would be powered by an Intel Atom Oak Z670 Trail chip.

This summer Intel finally got around to launching the Oak Trail platform starting with that 1.5 GHz Intel Atom Z670 processor aimed at tablets, netbooks, and other low power computers. The 45nm single core processor has a 400 MHz graphics core and can handle HD video playback. Yet it uses just 3W of power. But it’s not the only member of the Oak Trail family.

The Razer Switchblade isn’t currently using any of those chips though. Instead, the company put out a press release today letting us know that the latest version of the concept device has a 1.7 GHz Intel Atom Z690 processor. Razer says the chip gives it a 13 percent performance boost over earlier models, but we don’t actually know anything about the chip other than the fact that it’s clocked at 1.7 GHz and that it probably features a 45nm design, a relatively low TDP, and support for hyperthreading — all features shared by other members of the Oak Trail family.

Razer currently has no plans to sell the Switchblade concept device — but products based on the design could hit the streets at some point. Several Chinese software companies have already agreed to develop software supporting the platform.